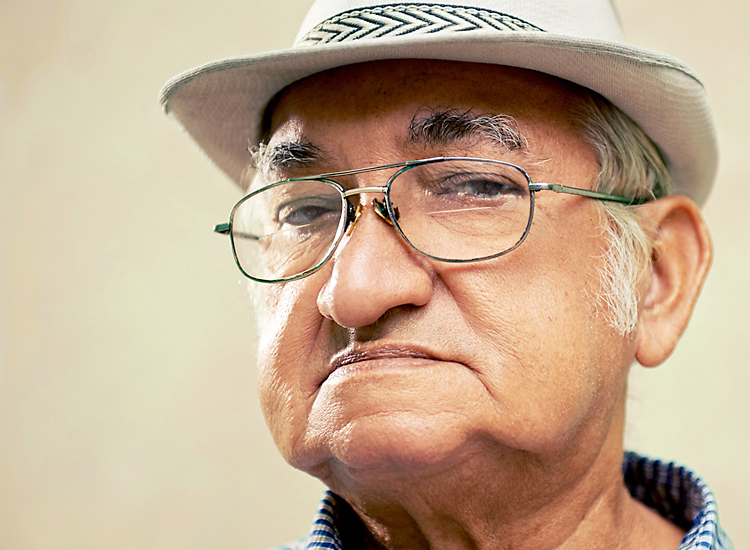 Not all visits with my friends take place in a nursing home. Sometimes removing the element of circumstance reveals a wonderful treasure.

It was a crisp autumn morning. Sunlight beamed through the cracks in the golden leaf cover. As I hiked with my two dogs, we encountered many others enjoying Wisconsin’s fall colors. From tots on training wheels to strolling seniors, I was quite familiar with the variety that our favorite county park attracts. Yet, my curiosity piqued as we approached a large looming figure.

His gait was stiff, but steady. His stature was square and solid. Wearing a red windbreaker, he reminded me of a large barn, that is, if barns could walk. Thick winter gloves protruded from his sleeves. Square black sunglasses, the kind tiny old ladies driving Cadillacs wear, shielded his face. A fedora topped the ensemble. Other than the forward motion of his legs, he didn’t appear to move. Everything about him seemed a contradiction. Yet, somehow it all belonged. I was intrigued.

The man kept a constant pace. My movement, on the other hand, was erratic. I was at the mercy of my canine companions who stop abruptly to investigate a smell, and then rush off in search of the next. As we took turns passing each other, a story unfolded.

I was convinced he had been an athlete, on track for the Olympics. A swimmer perhaps. But, after World War II gutted his dream, he begrudgingly took over the family heating and cooling business. Or, was it insurance? I couldn’t decide. He had a good marriage, but now he was a lonely widower. However, I decided that his isolation was of his own choosing. I was certain he wasn’t interested in socializing. Or was he?

I wanted to talk to him. Learn his real story. But, even though I had been visiting with nursing home residents for more than a year, the fear of rejection sometimes kept me at bay. “What the heck,” I thought and approached him anyway.

“Good morning,” I offered, as Bear and Olive yanked me closer.

His head turned slightly. It was mobile after all. “Good morning,” he returned. I had expected a low, rugged voice. But, instead, the sound he produced was clean and clear. Did I detect an accent?

“Do you walk here often?” I inquired, still nervous that I might be invading his preferred solitude.

“Ah, yes,” he replied, “several times a week. I have to get my exercise.” His mouth curved into a slight smile as he glanced down at the dogs.” Looks like you have some wonderful companions.”

I’m not exactly sure how it happened. But, his true story unraveled quite naturally as we walked side-by-side. It was very different from the one that projected across my mind only minutes earlier.

Renato Marcelli was born in Italy. After the war, his wife Lucinda, who was still alive and well, convinced him to move to The United States. Her uncle owned a small delicatessen that the young couple could manage and would eventually own. Enjoying the business tremendously, Renato passed it on to his children when he retired.

“Marcelli’s Deli!” I exclaimed. Only blocks from my house, I stop there often to pick up a pasta salad. It’s funny how something so simple can bridge the gap between people who have lived very different lives.

As if he had anticipated our meeting, Renato took out a wallet stuffed with pictures. In those images, I met his wife and two sons. I visited the condo he maintained just outside of Genoa. I was even introduced to Pesca, his beloved cocker spaniel who had died several years ago. When I looked up, his sunglasses were gone. The soft brown eyes of the young man in the photographs were looking down at me.

Renato was not a swimmer. Instead, he was a dancer. He shared wonderful memories of him and his bride sweeping elegantly across the dance floor, impressing everyone in the hall.

He told me about his childhood in Italy. Compared to American standards, Renato’s family was poor. However, they considered themselves wealthy. Unlike the neighbors who lost their father and sole source of income to illness, Renato had healthy parents and siblings. The Marcellis never tired of sharing their riches, inviting their less fortunate neighbors to dinner several times a week.

Renato asked about my life, which had been much shorter and not nearly as interesting. But, he listened intently, as if my words unlocked the mysteries of the universe. I couldn’t have been more wrong about the man who walked beside me. It was clear that he appreciated my company as much as I enjoyed his.

We had walked more than a mile together and were now approaching the parking lot. Our pace slowed. My little blue Fiat offered one final topic of conversation. We laughed at the irony of the American girl with her little Italian car and the Italian man with his Ford mini van.

I extended my hand as a farewell gesture. He embraced it in his gloved hands. A smile spread across his face.

“Can I give you a kiss?” he asked, exuberantly.

“Of course,” I replied. This man was full of surprises.

We said our farewells Italian style.

As I drove away, my heart swelled with joy. Then, I called my husband to tell him about my new friend.

What Renato Taught Me:

“Don’t judge a book by its cover.” We’re all familiar with the expression. Yet, we do it anyway. Every day. And then we scold ourselves.

Thanks to Renato, I no longer view this tendency as a character flaw. Instead, I see it as a natural human behavior that serves a purpose. It says, “Look here. A lesson may be waiting for you.”

I still allow stories to fill my head. Perhaps I even invite them. But now, I accept them for what they are — fiction. Sometimes the situation calls for further inquiry. But, most of the time I simply notice my thoughts and move on. In any respect, I am especially thankful for the courage to challenge my story about the man I met that beautiful fall day.

Renato also taught me the difference between happiness and joy.

Happiness is a temporary emotion based on circumstance. As circumstances change, feelings of happiness dissipate and are replaced with other emotions.

Joy, on the other hand, is not a feeling. It is a state of being. As such, joy is free from dependency on external conditions. Instead, it is born from something deep within. I believe that living in a state of joy comes from living in accordance with one’s higher purpose.

To truly understand the difference, follow this simple exercise.

Retrieve a pleasurable memory. Now, describe in detail the external conditions of that moment. Was the sun shining? Did you just receive fantastic news? Were you enjoying one of your favorite activities? Did others respond favorably to you? In your mind, peel away those circumstances until there is nothing left but you and your actions. How do you feel? If the positive sensation remains as strong as the moment you lived the experience, you have identified joy.

The morning I met Renato, the colorful leaves, sunshine, and my physical well being made me feel happy. Today, as I write this, the tree branches are naked. The cold November sky is grey. And my back aches from bending over the sink, washing a gazillion dishes from our Thanksgiving feast. Yet, as I think back to my time with Renato, something indescribable in its beauty remains.

One thought on “A Story of Joy”

The stories I share are based on my experiences. However, the characters and their personal circumstances are fictitious. They are composites of a variety of people I have met in my life. This is done to protect the privacy of the individuals I am blessed to call my friends.

I am Kerry Andersen. My goal is to inspire others in Southeastern Wisconsin to foster hope, joy, peace and purpose among nursing home residents, volunteers and the community.